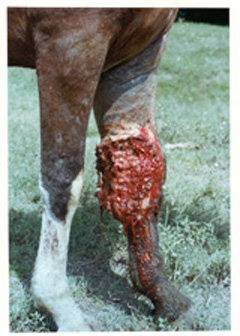 The first reports of infections caused by P. insidiosum were published last century in equines with cutaneous granulomas in Australia, Florida (USA), India, and Indonesia. Its true etiology, however, was not established. The first well documented cases in which a "fungal-like" etiology was suggested were published by Smith, Fish, and Drouin (J. Mycol Med. 6:151; 1996). Perhaps the important event in the history of pythiosis occurred when two Dutch investigators, (de Haan and Hoogkamer) isolated for the first time (1901) the organism from several cases of equine pythiosis. Their isolated could not be identified as it did not sporulate (a requirement for its identification). These investigators did not suggest a name for the organism, but they named the disease hyphomycosis destruens (mycotic disease of destructive character). Another Dutch investigator, J. Witkamp (1924) in Indonesia, isolated the organism for the second time, developed several serological tests for it diagnosis, and published the most comprehensive paper on this disease at that time (Ned. Ind. Bland. Diergenaeskd Dierenteelt 36:229;1924).

Sporadic reports of the disease in equines were made during the beginning of the 20th century. This in part was due to the finding that cutaneous granulomas in equines may also be cause by nematodes species of the genus Habronema. This is why the term used to describe pythiosis were also used for equine cutaneous habronemiasis. The early finding on the "fungal nature" of cutaneous granulomas in equines, therefore, was obscured by the new hypothesis of equine habronemiasis, and the theory fell into oblivion. Thirty seven years after J. Witkamp's studies, Bridges and Emmons report the disease in several horses in Texas. They isolated, for the third time in the history of this disease, a sterile filamentous organism. They believe it was close to the fungus Mortierella. However, the name Hyphomyces destruens (coined from the name previously proposed by de Haan and Hoogkamer) was proposed to describe this sterile filamentous isolate (JAVMA 38:579; 1961).

In 1974, Austwick and Copland reported that an organism isolated from equine cutaneous granulomas in New Guinae produced biflagellated zoospores in water and identified it as Pythium spp. A similar finding was reported later by Ichitani and Amemiya in Japan from cases of granular dermatitis in equines. They identified the isolate as Pythium gracile. In 1987, the binomial Pythium insidiosum was proposed by de Cock et al., (J. Clin. Microbiol. 25:344;1987). These investigators found that all P. insidiosum isolated from humans and animals, including the Japanese isolate, belonged to the single species P. insidiosum. A strain isolated from an Australian horse with the disease was later named P. destruens by Shipton (J. Med. Vet. Mycol.25:137;1987). However, this strain proved to be a synonym of P. insidiosum.