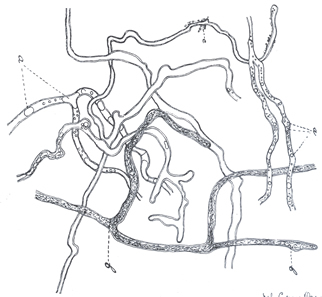 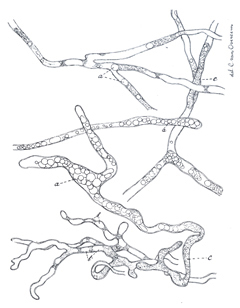 Figure 1 and 2 show Pythium insidiosum hyphae drawn by Jan Witkamp, a Dutch investigator in 1924. He was the second researcher to isolate P. insidiosum in pure cultures.

The genus Pythium comprises about 200 species. Pythium species are common pathogens causing disease in plants and fishes. The species of this genus are among the most destructive plant pathogens, inflicting serious economic losses of crops by destroying seed, storage organs, roots, and other plant tissues. So far, Pythium insidiosum is the only species reported to cause infections in mammals. The disease caused by this unique microorganism has been termed pythiosis (insidiosi) and can cause life threatening infections in mammals and birds.

Members of the genus Pythium have been described as "aquatic fungi". However, they are not true fungi (Kingdom Fungi), they belong to the Kingdom Stramenopila, Phylum Oomycota, Class Oomycetes (Peronosporomycetes), Family Pythiaceae. In culture, P. insidiosum develops sparsely septate fungal-like hyphae similar to those produced by the Zygomycetes (true fungi). Like other Oomycetes, P. insidiosum produces motile zoospores (asexual stage) when exposed to damp conditions. The zoospores are single cells with two lateral flagella that swim to find a new plant host where it completed its life cycle. Once in contact with the host the zoospores lose their flagella and encyst. It is believed that zoospores act as infecting units once in contact with a mammalian host (J. Mycol. Med. 6:151; 1996). Under conditions, still under investigation, P. insidiosum develops globose oogonia (sexual stage) typical of this species, but they very difficult to obtain  in most isolates.

Like other oomycetes, P. insidiosum grows relatively well on a variety of media. On corn meal agar and Sabouraud dextrose, colonies are colorless to white, submerged with short aerial mycelium and a finely radiate pattern. The coenocytic hyphae range between 4 and 12 mm in diameter with 90° perpendicular lateral branches. Septation is only occasionally observed in early hyphae, but they become abundant in old viable hyphae. Hyphal swellings, that mimic sporangia measuring 12 to 28 in diameter, are common in laboratory cultures.

Production of zoospores can be induced in water cultures containing minimal quantities of different ions and grassleaves at 37°C. Zoospores induction in water without ions is rare. Early sporangia cannot be differentiated from normal hyphae. This early sporangia, at maturity, flows their cytoplasm into a discharge tube and form a globose sporangium. The cytoplasmic content of the sporangium goes through progressive cleavage and biflagellated zoospores are formed inside a vesicle. The zoospores mechanically break the sporangium vesicle wall and swim approximately 20-30 minutes and then encyst. It is believe that P. insidiosum use a plant to complete its life cycle in nature (lily or grass), but this is yet to be confirmed.

LIFE CYCLE. Pythium insidiosum, like other Pythium spp, need wet environments to carried out their life cycle in nature. It also can grow in wet soil with grass because its ability to produce resistant spores. Several investigators have shown that this pathogen requires some plants to complete its life cycle in nature (lily and gramineae (grass). It is believed that the zoospores are the infecting units. After exposure to water containing zoospores they will be attracted by small wounds in the host's skin, intestinal tract and other sites. The zoospores will encyst and then produced hyphae that will, mechanically, penetrate the tissue and cause the disease. The majority of cases in equines occur through open wounds on the skin of the extremities and areas in contact with water or grass. In Dogs, the disease is observed in the skin and the intestinal tract. This is due to the fact that dogs may drink water and/or eat grass contaminated with P. insidiosum.